FinCEN follows the money by looking at who does and doesn’t file an FBAR (FinCEN Form 114) directly to their agency, the Financial Crimes Enforcement Network, a bureau of the Treasury Department, which is separate of the IRS.

Beginning with the 2017 tax season, FBAR reporting became due by April 15 rather than the previous June 30 of each year for the previous year. Extensions are due October 15.

Why bring the subject up now?

Holders of foreign bank and financial accounts don’t have as much time as in the past, and FBAR reporting is more highlighted by the IRS as being filed (or not) along with other mainstream tax filings.

Most people simply don’t talk about involvement in foreign financial assets or accounts. FBAR comes across like a four-letter word that nobody wants to admit exists or speak aloud in polite society. The IRS barely mentions offshore assets; defaulting to little more than YES and NO boxes buried in pages taxpayers would rather say they missed.

The FBAR, (FinCEN Form 114) isn’t even filed to the IRS. It’s a separate submission and is electronically filed directly to FinCEN, the office of Financial Crimes Enforcement Network which is a bureau of the Treasury Department, which is separate from the IRS.

NOTE:  This information does NOT include Form 8938 which is filed with the IRS. Click here for Form 8938 requirements and comparison.

Why is FBAR important now?

In 2013 the Government Accountability Office (GAO) published “OFFSHORE TAX EVASION; IRS Has Collected Billions of Dollars, But May Be Missing Continued Evasion.” The Feds became even more interested. Simply too much money sitting on the table to be ignored.

Once a taxpayer becomes involved in a late- or non-filing investigation, they are severely limited as to their options. Any proactive (pre-investigation) remedies which would have probably garnered them favorable consideration are gone.

Taxpayer fear of filing a first FBAR as a late (or even first-time, on-time) filing is tremendous. Purposely opening the door and “admitting failure” to a federal crimes network seems to come across as more dangerous than gambling that the Feds won’t knock your door down with their investigation.

Generally speaking, walking through the Feds’ front door with your hat in hand is safer than the Feds showing up at your door with a battering ram.

Who needs to file FBAR?

The reporting threshold, or the total value of assets, is the aggregate value of financial accounts exceeding $10,000 at any time during the calendar year maintained by a financial institution physically located in a foreign country. This is a cumulative balance, meaning if you have 2 accounts with a combined account balance greater than $40,000 at any one time, both accounts would have to be reported.

How do you know you have an interest?

This is one of those times when details matter, and if either of the below catch your attention, you have reason to get professional help.

For a more complete listing of types of foreign assets and whether they are reportable, click this link  Again, if any of the above that catch your attention, you have a legitimate reason for concern.

Because the Feds aren’t going to quit looking. Don’t gamble on not being caught. There is too much money at stake. There are various ways to approach both late filings and first-time required filings. Without a solid, long-range plan of action, you not only limit your options; but in the case of late filings, you could find yourself with a serious and expensive legal issue. Tax law has some interesting twists. If the IRS says you’re guilty; you must prove you’re innocent.

What are the penalties?

For FBAR (FinCEN Form 114) alone, you’re looking at civil monetary penalties adjusted annually for inflation. For civil penalty assessment prior to Aug 1, 2016, if non-willful, up to $10,000; if willful, up to the greater of $100,000 or 50 percent of account balances. Criminal penalties may also apply.

Coming clean to all the Feds is your best option.

If you think you fit the definition of ‘who must file an FBAR,’ we need to talk. FinCEN and the new tax laws aren’t for the faint of heart, DIYers, or “fly-by-the-seat-of-your-pants” kind of person. Don’t go it alone.

Whether you’re a business owner or not, every person should have a proactive, planned tax strategy. Act rather than react. Don’t wait until it’s time to file your taxes to begin your preparation.

I’ll say it over and over: Tax preparation is full-time, year-round work. The filing is the result. You can have the same opportunities as my clients have to control your own financial future. I can become your CPA tax specialist and financial business and life goals advisor and you can have the control you need and want.

Our goal is to become part of your overall life and business goal planning team so you’ll be able to establish your own goals and know that you have a trusted professional on your team. We establish and maintain a personal and business relationship with our clients. Your LIFE is your business and your BUSINESS is your life. We’re here for YOU. 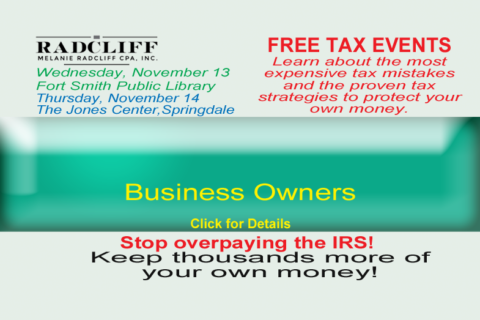 If you think you overpay business taxes, do you plan to keep making the same expensive tax mistakes? Tax-savvy business owners grab every tax…